The last 72 or so hours have been tumultuous.  I’ve been racking my brain over this divorce settlement – trying to sort out the terms I can live with; the terms that infuriate me to the point that I have no choice but to demand more from; the terms that bother me on principle; and the terms that I have to simply accept for the sake of both my immediate and long-term happiness.

To make matters worse, Jabba is now saying she wants the kid back on December 28; essentially giving her the entire second week of his winter break.  This despite her saying she wanted me to have him for the majority of his break.  If she wanted to simply switch weeks, I could live with that.  I don’t understand the need for her to phrase it as if she’s giving me Christmas as some major self-sacrifice. By this time next year, I am fully confident that the divorce will firmly be in place. Once it is, I’ll proceed strictly by the terms of the final order.  No more favors.  No more flip-flopping weeks (I say that now).

I talked to LeRoy about the final divorce order last night and he really helped put things into perspective.  He reminded me that I’ve got to think in terms of the overall bigger picture.  Trying to fight some of these smaller issues on principle could start opening up other proverbial cans of worms that I don’t want to get into – largest among them back child support.  Virtually everyone agrees that I got a good deal with child support – and I don’t want to rock the boat, so to speak.  Basically, I have to pick and choose not only my battles, but my acceptable losses as well.

Last but not least, I cannot thank The Auteur enough for all of her love and support through this process.  If there’s any one trait of hers I’m trying to pick up, it is her ability to compartmentalize things (for the lack of a better word) She has an ability to not let the random bad things that happen sabotage and otherwise good day.  I wish I was more like her in that regard.  Needless to say, I am still a “work in progress” in that area, but I am trying.   Like all couples, we disagree and fight at times, but we always have each others backs.  We love each other and are definitely in this together for the long haul.

Earlier in the evening I talked with my Mom about the whole Christmas break switcheroo.  She reminded me at The Kid’s age, Christmas is THE important holiday and it really is important to have it with him and that I need to – again – think of the bigger picture.

I wasn’t really happy at the end of the conversation with Mom.  I was feeling quite defeated actually. At that point, one would think that the talk I had with LeRoy would only make me feel even worse; but a strange sense of calm came over me.  I think I have finally reached the point that this divorce ruling is something I can live with.  I’m not sure how it happened, or when; but I’ve think I’ve truly come to terms with this whole thing. 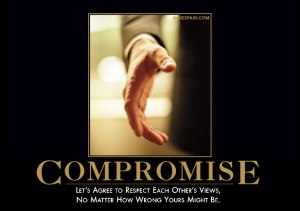