Not a Father’s Day 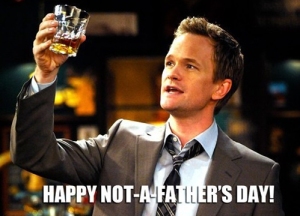 Unlike Barney, I’m clearly not talking about avoiding a pregnancy scare

I had some very mixed emotions going into Father’s Day 2015.  This was my first Father’s Day without The Old Man.  This Father’s Day would also be one which I would be spending without The Kid – for reasons which I’m not really inclined to discuss here yet.  This is also a Father’s Day of great anticipation:  within the next few weeks – if not days, The New Guy will be here.

I didn’t feel much like a Dad this year for Father’s Day; nor did I feel like much of a son.  There were a few gaping holes in the day.

Don’t get me wrong.  The Auteur and I went out to eat Friday night.  She made a great breakfast Sunday morning.  Then we tag-teamed on dinner for her day Sunday afternoon.  To cap off the day, her and 1B got me some nice gifts; but in those moments when I was alone, all I could think about were my Dad and my son.

Two years ago was the last time I got to spend a Father’s Day with both of them.  I knew then how fortunate I was.  I had no idea that what a “first father’s day without my dad” would feel like; but clearly I knew it would come sooner rather than later.

As much as not having The Old Man here, not being with The Kid is consuming me.  All I’m willing to disclose right now is this:  I’m working on it.  Jabba and I have had no communication for nearly 3 months  and that is no accident. We are not co-parenting and that is a situation I am working to recitfy.